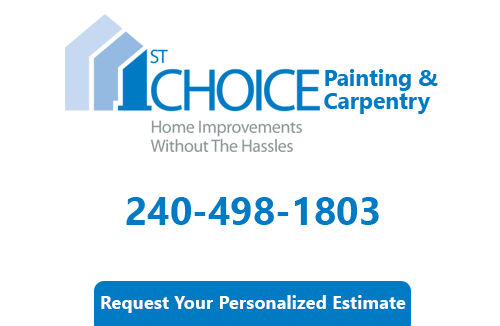 Our Newsletter - Painting, Carpentry, and Home Improvement in Montgomery County

If you are looking for a newsletter from our painting and carpentry specialist in Bethesda please call 240-498-1803 or complete our online request form.

Dear John, During the past six or seven years,my wife and I have employed John Rabner and his crew for several jobs around our household and we found him AND his crew to be responsible, careful, thorough , trustworthy, and competent workmen. The first job was to spruce up our front entrance way. They did so along with extra things he did without any extra charge. Subsequently, having seen the work they performed, we hired them to paint our house. This involved more than just painting the house. He ordered his men to clean up some of the mess former painters had made, sanded and cleaned before painting and otherwise did a bang up job. Some years later, he put screens over my gutters and did a masterful job there. No more gutter leafs and no more on the roof. Again, some time later, we asked him to paint the better part of the interior part of our house. This involved some carpenter work as well, mudding some holes in our walls and other things. John and his crew show a general concern for what they have been asked to do and do more than the contract calls for because John sees it as the nice and right thing to do. We will never have anything done to our house without first checking with John. These guys are outstanding and I don't know how to recommend them any further. They are just tops in our book.
- Edward & Esther D.
Read More

I highly recommend 1st Choice. This winter, a pipe burst in my mother's house. The basement had to be completely gutted. John and his crew responded quickly. He provided a detailed estimate and did a beautiful job! Tyler Whitmore, Bethesda, MD It is my pleasure to write a few words on behalf of John Rabner of 1st Choice Home Improvements and Painting. Over the last several years (since 1994), I have had a number of varied home improvement projects completed to my utmost satisfaction by John Rabner. They have included painting the interior and exterior of our home, a large deck on the rear, floor to ceiling shelves in my garage, a pull-down attic door and stair installed as well as flooring in the attic, complete renovation of my family room to include beam removal, ceiling molding replaced and walls and cabinets painted as well as a new door installed, latticework around the base of my raised back porch with a hinged door for storage, and most recently, a new roof. In addition to adhering to the highest standards of craftsmanship, John Rabner has impressed me with his integrity. He will take the time to explore options I had not thought of as well as let me know if a less expensive alternative is more feasible. I can always be sure he will return my call, be there when he says he will, keep me apprised of the progress of the work and be respectful of my home. I am very happy to highly recommend John.
- Maura H.
Read More